Every morning I tell myself to write because writing has to be a discipline; like painting. 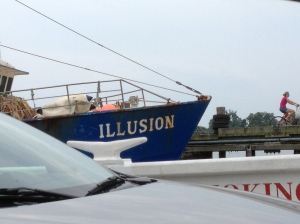 You may not want to do it, but the more you do it the better you become at it, and the less frightening it will be.

But every morning The Kink’s come into my brain singing “Nothing To Say”.

I’ve not much to say because I have SO much to say that it is overwhelming. How’s that for moronic?

Sometimes all I can do are my chores and listen to music.

I will say this though; there are times I feel like a visitor in my life. I am a voyeur. I am watching life spin around my body taking its course. Sure I am participating but sometimes that participation is mechanical because there is so much to do that there is no time to think. I like this when I am painting because I check out mentally – it’s my meditation in action. Please excuse the cliché’s.

My mother had a stroke back in December. We were lucky in that it was a “small” one (doctor says there is no such thing as a small stroke, so people should stop saying that). She was doing very well, getting around on her own but still weak. Being a very independent woman, she just couldn’t help herself, and had to clean the parsley off the kitchen floor on her hands and knees. No, this is not a woman who uses a mop because they “DON’T WORK“.

Whilst crouching on the floor she lost her balance and fell on her backside breaking her back. Okay they call it a compression fracture but I saw the x-ray and it was scary. Osteoporosis and arthritis in the elderly are no laughing matter, but the funniest thing about her fall was her phone call to me afterward:

After her adventure in the convalescent home, I got her back to our house, and we are dealing with the healing. I swear to you I haven’t stolen ONE morphine pill. But, red wine is my friend at the end of the day.

The smartest thing I have done in this uncertain time, was to jump into the ocean and paddle around like a fool on my surfboard. It was humbling, crumbling, bumbling and healing. I’ve said it before and I’ll say it again: get into a body of water. It is cleansing in so many ways.

My other notion rattling round my brain is that of denial. Denial is my new favorite topic. Last year it was Narcissism. I swear these diseases are a blast! I’ve gone through the stages of trying to get someone to open their eyes, getting angry, getting sad, and now I just watch in disbelief. Yeah, I’m pretty slow-minded at times.

Denial can be applied to just about anything but it can also disguise itself as perspective, so be wary. I’m too tired to extrapolate but mark my words, I will be discussing this in the future.

My apologies for the disarray.